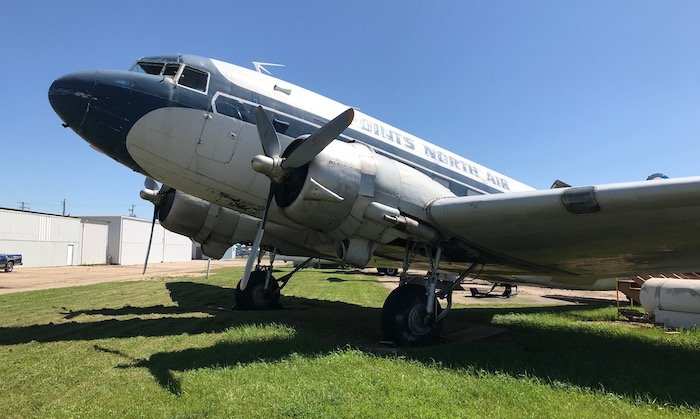 Douglas C-47A, serial number 42-23951 began life in the Douglas aircraft factory at Long Beach California in 1942 and was delivered to the United States Army Air Corps.

The aircraft that would someday be registered in Canada as C-FCQT, was then transferred to the Royal Australian Air Force to move supplies and soldiers into Pacific islands to fight against the Japanese.

In October of 1943 the aircraft was part of one of the biggest parachute drops in WW2. CQT flew against the enemy in numerous actions and received a few well-patched holes for her effort.

At the end of the war CQT was based on several captured islands moving wounded soldiers to   Australian hospitals. In late summer of 1945 CQT was based in Japan as part of the occupation forces.

CQT was sold to Qantas Airlines, and changed hands many times over the next few years. She served West African Airways, and Nigeria Airways before making her way to Aer Turas in Teoranta, Ireland.  In her Irish days she was painted red and operated as a charter aircraft carrying tourists back and forth across the Irish Sea to England, where her passengers shopped, and attended sports events. There are still traces of red paint in the aircraft.

The aircraft arrived in Canada in 1970 and flew oceanographic missions out of Prince Rupert and then carried cargo and passengers for Ilford Riverton Airways in Winnipeg. After a major accident at Gimli, the aircraft was eventually repaired and served Buffalo Airways in Yellowknife.

Points North Aviation bought and operated CQT for many years as a freighter during the northern construction boom of the early nineties.  By this time CQT was getting tired and expensive to maintain. After several years of outside storage, she was donated to the Saskatchewan Aviation Museum and Learning Center.  The restoration process is underway, and she will become a gleaming icon of the contribution of aviation in the social and economic development of Saskatchewan.

·      Registered to Commonwealth of Australia.

·      Left in a derelict state at Winnipeg Airport until repaired and returned to service – March 1979.

·      Sold to J. McBryan, Yellowknife, Canada – January 25, 1994 Buffalo Airways is a family run charter and scheduled airline based in Hay River, Northwest Territories, Canada. It was established in 1970 by Joe McBryan (also known as Buffalo Joe) and operates scheduled passenger services and cargo and passenger charter services, as well as firefighting and fuel services. Its main base is Hay River Airport (CYHY) and two other bases at Yellowknife Airport (CYZF) and Red Deer Regional Airport (CYQF).

·      Sold to Points North Air Services Inc t/a Points North Air – July 21, 1994 Operated as a freighter Withdrawn from use and cancelled from the Canadian Aircraft Register  – March 21, 1996 Airframe still in existence as of 1998.

Obtained by the Saskatchewan Aviation Historical Society in 2007. Brought to Saskatoon in 2015.