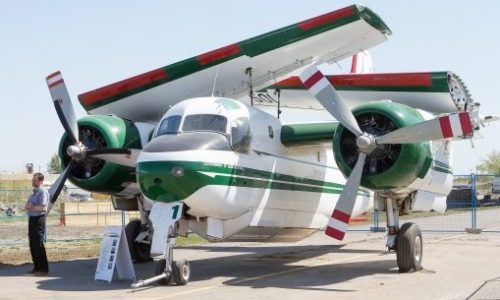 HMCS Bonaventure was Canada’s last aircraft carrier in-service. When Canada acquired the Tracker it was assumed the Bonaventure would operate the US – built Grumman Tracker. However that aircraft was about 11 ¾ inches too long to be accommodated by the deck elevators used to take aircraft from the deck to maintenance hangars below deck.

So, De Havilland Canada in its Toronto factory built a shorter Canadian (Canada De Havilland SC-2F) version that fit the aircraft carriers elevators. There were other uniquely Canadian changes.

The Tracker was of conventional design with propeller-driven with twin radial engines. A high wing could be folded for storage on aircraft carriers, and tricycle undercarriage.

The Tracker carried an internal torpedo bay capable of carrying two lightweight torpedoes or one nuclear depth charge. There were six under-wing hard-points for rocket pods and conventional depth charges or up to four additional torpedoes. Sonobuoy’s in the rear (16 in early marks, 32 in the S-2E/G).

A total of 99Trackers were built by de Havilland Canada, with the first Canadian-built aircraft flying on 31 May 1956. From 1957 onwards, these aircraft operated from the newly deployed aircraft carrier HMCS Bonaventure.

After Bonaventure was decommissioned in 1970, all remaining Canadian Trackers were transferred to shore bases. This limited their usefulness for ASW patrols, and between 1974 and 1981 gradually all but 20 were placed in storage and the remainder were stripped of their ASW gear.

The remaining active-duty Trackers served until 1990 on fisheries protection and maritime patrol duties. A handful of Trackers were kept in flying condition until the late 1990s but were no longer used for active service.