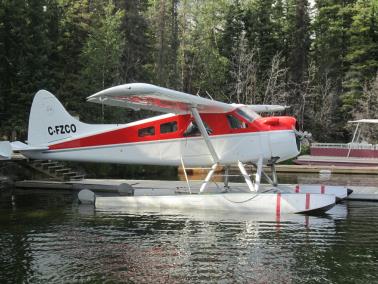 The Beaver was designed and built in response to the demands of Canadian bush operators. With its all-metal construction, high-lift wing, and flap configuration, the Beaver was a robust aircraft with excellent short take-off-and-landing capability even with heavy loads.

In addition to its success in Canada, the Beaver found acceptance in as many as 60 other countries all over the world. Although not ordered by the RCAF, some 980 served with distinction in the US Army and US Air Force. About 1600 were made.

The Beaver was such a success that more were built than any other aircraft designed and manufactured in Canada. In 1951 it won both the US Air Force and US Army competitions for a utility aircraft. Many were used in Korea, where it was known as the “general’s jeep”.

The Beaver was designed for flight in rugged and remote areas of the world. Its STOL capability made it ideal for areas normally only accessible by canoe or foot. Because the aircraft often flies to remote locations and in cold climates, its oil reservoir filler is located in the cockpit and oil can be filled in flight. A series of upgrades to the basic design were incorporated. One major customer introduced the use of flat steps replacing the earlier tubes, a feature now almost universal. In 1987, the Canadian Engineering Centennial Board named the DHC-2 as one of the top ten Canadian engineering achievements of the 20th century.